What Eats Mosquito Larvae in an Outdoor Water Feature

It may surprise you to learn that mosquitoes are born in water. While mosquitoes may spend much of their adult life in the air, they start life as larvae anywhere there's some shallow water on your property. But if that next generation of annoying mosquitoes will be coming back to literally bite you next season, doesn't it make sense to get rid of them before they have a chance?

Part of the issue is that mosquitoes can breed in just about any standing water. From ponds and pools to shallow marshes, clogged gutters or even that old tire with some water inside after a recent rain, mosquitoes are resourceful opportunists.

However, there are mosquito predators that eat mosquito larvae, and if you have a problematic pond or other water area on your property that is attracting too many mosquito larvae for your taste, you may be able to tip the balance in your favor. 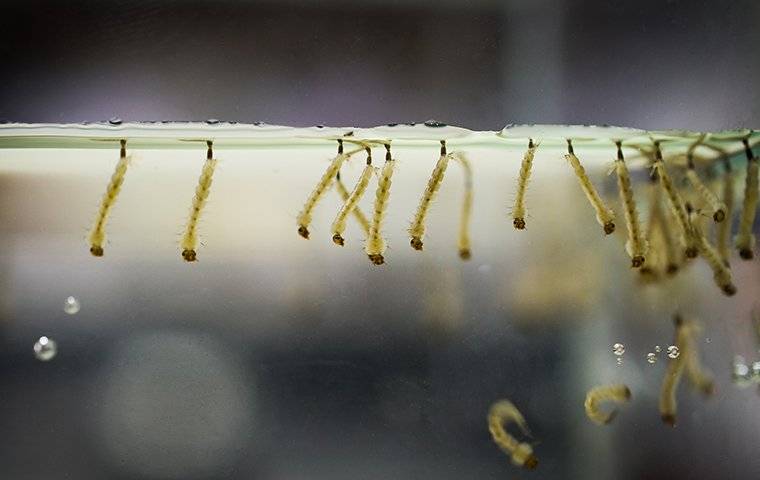 A Primer on Mosquitoes

Those eggs will turn into larvae, then hatch into stinging, biting mosquitoes. Some mosquito eggs can even live up to five years before hatching, meaning that there could be a substantial delay between a mosquito larvae infestation and the birth of mosquitoes that can make your outdoor areas more of a nuisance than a place to relax.

As for why they bite, mosquitoes use infrared radiation, visual cues and chemical sensors to hone in on their victims. Unfortunately, mosquito-borne illnesses also cause more than two million deaths worldwide each year.

So, What Eats Mosquito Larvae?

For a pond or similar water area, try adding some mosquito fish (Gambusia), which can make short work of that mosquito larvae before they hatch into adult mosquitoes. Unfortunately, mosquito fish are only available in certain states and may be illegal in others, so they won't work everywhere. Other types of mosquito-eating fish include goldfish, koi, guppies, bass, bluegill and catfish.

Even bats and some turtles eat mosquito larvae, but the most well-known mosquito predator is probably the mosquito hawk, which is a type of dragonfly. Other insects that eat mosquitoes include nematodes and spiders, and mosquito-eating birds include purple martins, swallows, ducks, geese and terns -- some bird predators may even eat adult mosquitoes!

That said, the best way to prevent mosquitoes from ransacking you, your family and your guests every time you head outside is to ditch the workarounds and go with mosquito spraying or misting. The substance isn't toxic to pets or people, yet it'll kill those pesky mosquitoes on contact, ridding your property of biting mosquitoes once and for all. The best part is that if you call us out, we'll give you a free estimate and advise you on the best way to get those mosquitoes off your property. Check out our mosquito services and call Tuxedo Mosquito Control today!

Tuxedo Mosquito Control received an average rating of 4.9 out of 5 stars from 160 reviews. 4.9